There exists Natural therapy with no drugs or prosthesis, effective and zero-cost. It is important, both from an ethical and a socio-economic perspective, that all individuals affected by these symptoms are made aware of the existence of such a natural therapy.

By sleeping regularly on your stomach or on one side pushing the jaw on the pillow (mandibular decubitus), you produce a trauma on all the components of the masticatory system. Such trauma, which generally persists the entire night or most part of it, may after some years, cause a number of pathologies.

Only by changing your sleeping position, hence allowing your jaw to move freely, you can favor the Spontaneous Swallowing mechanism. Thanks to its natural healing effect the latter can alone cure and harmonize the components of the masticatory system. Smart Bite can help to correct the sleeping position.

Sleeping in a wrong position is the most serious offence one can inflict to the temporo-mandibular joint and the counter lateral condyle (i.e., the opposite condyle to the side of the decubitus). The condyle and the disc (i.e., the victims of the decubitus) ensure that the jaw moves in all directions and bear all the intermittent loads produced by the chewing muscles during mastication and deglutition. When we assume wrong positions during the sleep, the condyle and the disc are subject to a static, continuous, long-lasting and non-functional load for several hours. Such load has the effect of pushing the condyle and the disc towards the glenoid cavity, an area which is rich of vessels and nerves, therefore highly algogenous, against a thin weak bone whose structure is not apt to bear excessive, static and continuous loads for several hours. After bearing pain and strain for many years, meniscal and joint ligaments are stretched and become lose. Under continuous pressure, the condyle is misshapen and deformed. The disc is deformed and slides forward. Pain and clicking, grating, crackling start appearing during movements, opening and closing of the mouth become limited. All these effects characterize the TMJ disorders, also known as cranial-cervical-mandibular disorder DCCM. 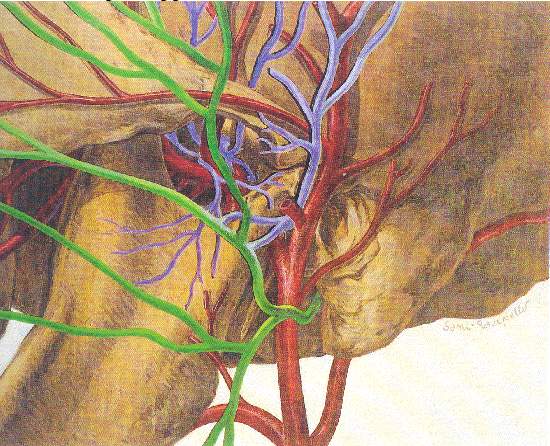 The image evidences the rich presence of vessels and nerves in the region which is subject to pressure when we assume wrong sleeping positions during the night. As a result, blood circulation is hindered, with consequent sufferance for the nerves.

The compression of the middle meningeal branch of the trigeminal nerve is the cause of migraine.

The compression of the ophthalmic branch of the trigeminal nerve is the cause of eye pain.

The compression of the auricolo-temporal nerve, the eardrum cord, the auditory duct and the Eustachian tube may also cause neuralgia and ear pain.

THE NEURALGIA OF THE TRIGEMINAL NERVE IS OFTEN FOUND IN PATIENTS WHO REGULARLY SLEEP ON THEIR JAW. SUCH NEURALGIA CAN BE HEALED ONLY IF THE WRONG SLEEPING POSITION IS CORRECTED.

Other symptoms wrongly attributed to unknown causes include: hum, buzzing, whistling, tinnitus, ear ringing, hissing, auditory impairment, muffled sounds, dizziness. These are other symptoms of unknown unfairly judged if you do not evaluate the trauma of mandibular decubitus and the particular anatomical region where this works. 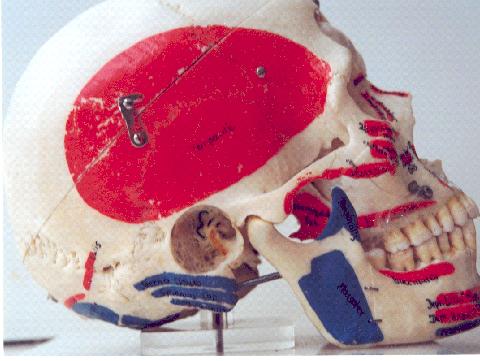 The image evidences the close link existing between the condyle and the back wall of the articular cavity, behind which are the components of the inner hear: the cochlea (the auditory portion of the inner ear) and the semi-circular canals (vestibular organ, equilibium). The trauma produced on this thin weak bone, which is not meant to bear excessive load, is the cause of the disorders described above. Furthermore, this image also shows on front of the articular cavity( eminence ) the thick and robust bone on which the condyle leans for a correct functional activity.

During the night, head and neck weight heavily on the jaw. The position of the jaw is deviated on one side in forced lateral occlusion. Instead of resting, the neuromuscular component is active throughout the night, to oppose the weight borne by the jaw. Spontaneous Swallowing is repeated every 4 minutes. Masticatory muscles are subject to great effort in order to move the jaw from forced lateral occlusion to maximal intercuspidal occlusion. This movement can occur only by grinding teeth, hence bruxing. The stress arising from the trauma and the accumulation of catabolytes in the muscles (caused by hyperactivity) cause pain and muscular strain. BRUXISM during the day constitutes an attempt to rebalance the jaw (see Bruxism: teeth grinding & tmj dysfunction).

NECK ache, PAIN in the shoulders and lumbar region

Neck ache, pain in the shoulders and lumbar region are all consequences of a wrong posture. The displacement of the jaw which is the consequence of a wrong sleeping position, causes unbalance in the head and therefore on the whole postural system until the feet. Often patients indicate that by correcting their sleeping position not only they have recovered from TMJ disorders but also from all those disorders which appear not to be linked to this pathology, including muscular pains.

In conclusion, I believe the cause of the disorders which I described above is clear if one considers the consequences of the mandibular decubitus.

I REGRET THAT THE SCIENTIFIC COMMUNITY HAS NOT YET RECOGNIZED MY INTUITION AND VERIFIED THE SUCCESSFUL RESULTS OF THE ZERO-COST THERAPY I HAVE SO FAR IDENTIFIED.

Unfortunately, several doctors are misinformed and they limit themselves to curing the symptoms without understanding the cause of such symptoms. As a consequence, they reach poor results and face certain recidivism. I hope that the Universities and all the Ministry of Health will in future pursue a more focused and accurate campaign to inform the population, and that doctors and dentists will verify the healing effects of the Spontaneous Swallowing mechanism on the Galiffa’s Mandibular Decubitus Syndrome. When everybody will understand the true cause of the DCCM, (TMJD) professional ethic will force doctors to explain to their patients what they can do to alleviate and resolve their problems, simply learning to sleep correctly (i.e., on the back) and not on the stomach or on one side.

I hope that all the false myths will disappear: bruxism, stress. Unknown causes for humming. ATM disorders, wrong occlusion. Periodontitis, periodontal disease infections, predisposition… TRIGEMINAL NEURALGIA never will be “the suicide disease". For a more complete picture of this problem, I invite all the readers to have a look also at the following articles: Bruxism: teeth grinding & tmj dysfunction The scientific explanation: it all originates from a natural act. Spontaneous Swallowing Stress and emotional tensions are not the causes but the consequences. Pyorrhoea or Periodontitis, Halitosis The chronic trauma caused by decubitus on the jaw is the cause of periodontitis and its recidivism (periodontal disease is like bed sore). The correction of the decubitus after therapies avoids recidivism of all the pathologies described in this article strengthens and stabilizes the teeth.
Periodontitis does not appear in individuals who regularly sleep on their back.